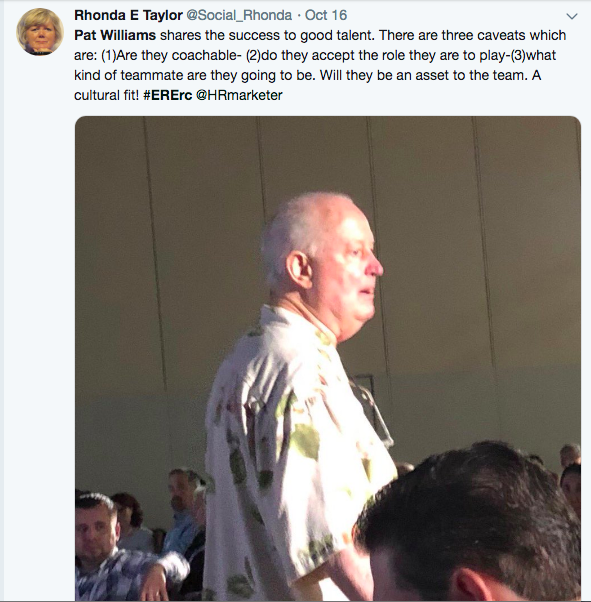 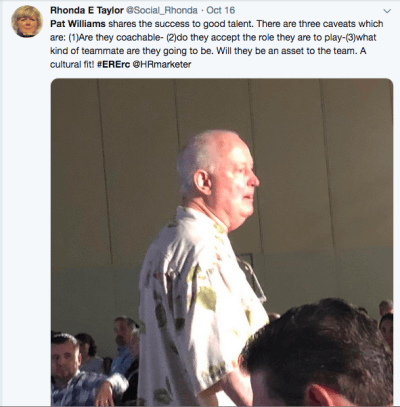 Pat Williams is the senior vice president of the NBA™ Orlando Magic.

I recently returned from ERE Orlando, held Oct. 15-17 at the upscale Gaylord Palms. It was the biggest ERE event ever, with more than 600 high-level HR professionals in attendance. I think part of the credit goes to this year’s theme, diversity and inclusion, which is a hot topic.

One of the highlights of the event was the inspiring 40-minute presentation by 78-year-old keynote speaker Pat Williams, a longtime NBA executive, radio host and motivational speaker. Key points included:

Many an athlete, Williams said, who has good skills has never made it in the professional ranks, simply because they weren’t a character fit.

Another highlight was the presentation by diversity strategist Torin Ellis, who emphasized the theme “show me, don’t tell me.” He said that there is no finish line when dealing with diversity and inclusion, and that a D&I plan involves everyone in a company. He told the story of Stephanie Lampkin, who couldn’t get a Silicon Valley job despite have two Ivy League degrees, because she was female, black and gay. Today she owns her own company, Blendoor, a blind recruiting app to remove bias in the early process for finding talent. It just acquired $1 million in funding.

I always enjoy ERE events, as they are always in locations that are relaxing and comfortable, so it was great to see this one be so successful. I spoke to several attendees, and they all agreed that this was a go-to event, with one woman saying that ERE always has the best food. As for me, I particularly enjoyed the café atmosphere at lunchtime and the networking times with music—the sax player really hit a home run with me as it’s my favorite instrument!

If you’re interested in ERE events, you might consider attending ERE San Diego, which will be held April 22-24. Information is available online at https://www.ererecruitingconference.com.

Posted in Conferences and Expos