Microsoft bought LinkedIn. The best article I have read on the deal comes from Vox. If you want an HR perspective John Sumser and Matt Charney offer interesting reads. So does Sarah Brennan. They are certainly more qualified than me to speak on this topic. Nevertheless, here’s my take on the acquisition, with a lens on the deal itself and what it might mean for HR tech.

66% of revenue came from Talent Solutions – where companies pay for posting job ads and other recruiting services. So I found it quite interesting that few analysts and media outside of the HR/recruiting space bothered to even mention the words Talent Solutions, HR or recruiting when analyzing the deal. Even Nadella’s memo to Microsoft employees didn’t mention these words.  I believe you’re not seeing the mainstream media and analysts talk much about LinkedIn’s Talent Solutions because it’s not where the long term value is for Microsoft in spite of being responsible for 66% of LinkedIn’s current revenue.

So why does Microsoft want LinkedIn? 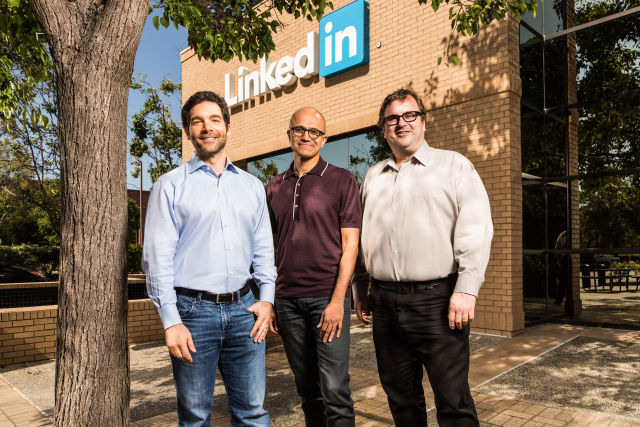 Microsoft has transitioned to a company that primarily sells online services to business customers. Gone are the days of selling individual copies of software to consumers. Azure cloud, Dynamic Online, and Office 365 (bundled with Yammer, Skype, etc) do over $5.5 billion in revenue and many experts believe a substantial amount of it comes from Office 365. Some estimate that the total number of paid Office 365 users might be over 70 million.

To be clear, LinkedIn’s value comes from it’s data. So, for the deal to pencil out Microsoft must use LinkedIn’s data to grow revenues. And the only way to do this is to (1) sell more LinkedIn products to more Microsoft customers and (2) sell more Microsoft products (and/or get more $ out of existing Microsoft customers) by leveraging the value of LinkedIn data. LinkedIn data can add a lot of value to Office 365 / Cortana, thus helping them sell more Office 365 subscriptions to more enterprises and small businesses — that, it is worth noting, are paid for by employers that are heavily vested in Microsoft, not fickle consumers that can cancel at anytime.

The acquisition begins to make financial sense if LinkedIn ‘data’ can help generate more revenue from even a small percent of the 70 million Office 365 users, not to mention the potential opportunities from the 1.2 billion Office users. And we haven’t even mentioned Lynda yet.

Again, this is why I believe you’re not seeing the mainstream media and analysts talk much about LinkedIn’s Talent Solutions – it’s not where the long term value is for Microsoft in spite of being responsible for 66% of LinkedIn’s revenue.

But it’s a huge deal to the ATS, HCM and recruiting technology vendors whose products rely on having access to LinkedIn’s API.

This brings me to the risks of this deal.

For HR tech vendors, it’s losing access to LinkedIn’s API or having more limitations to the API. I asked two HR technology analysts about this. One said it’s a real risk and access is likely to be further limited. Another said he had no idea. I also asked the CEO of a recruiting technology vendor whose software relies heavily on LinkedIn data. She said she was less worried now than before the acquisition. Takeaway? Nobody knows what might happen.

The primary risk for Microsoft is not being able to fully leverage the value of LinkedIn data. And I believe this boils down to how well Microsoft integrates LinkedIn. And Microsoft doesn’t have a strong track record of successful integrations.

The primary risk to the LinkedIn ’product’ (not the company which is now Microsoft) is its users abandoning the platform,not keeping their profiles current and not publishing content. This is the data that Microsoft paid 26 billion for.