In Arthur Miller’s 1949 Pulitzer Prize- and Tony Award-winning play “Death of a Salesman,” main character Willie Loman dreams of being a successful salesman, and believes the key to success is being well-liked.

He struggles, however, and ultimately gets fired, as selling based on relationship building is surpassed by new technical and analytical sales techniques. The sad truth for Willie: sitting down over beers and talking about the kids going to college was no longer the way to sell.

Fast forward to today. We rarely shake hands with prospects or buy the dinner (because we’re rarely in the same location), but make no mistake—the Willie Loman technique is back in sales. That’s thanks to social media. Social media didn’t exist in Willie Loman’s day, but it allows us to add the personal side back into sales, and to get to know prospects as professionals and people, as well as get to know the companies they work for—often even before the initial call.

That’s why I say a little Willie Loman should live in every sales rep. Here are some tips for how you can use social media to bring out the Willie Loman in you.

1. Make sure your social media profile is complete. 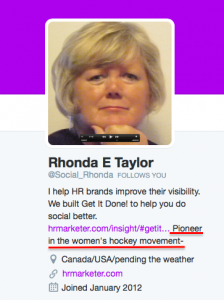 Sharing something unique about yourself on your social profile is also a great attention grabber and might serve as a conversation starter.

This doesn’t just mean that you are on LinkedIn, Twitter, Facebook, etc., but that your profiles let strangers (potential prospects) know the type of person you are: a type of person they should want to do business with. For example, on LinkedIn show that you are socially responsible by including your volunteer work and achievements in your profile. Sharing something unique about yourself on your social profile is also a great attention grabber and might serve as a conversation starter.

2. Take the extra step on social after initiating a contact with a cold prospect.
The basic sales process with a cold prospect usually begins with an introduction letter, then immediate follow-up through LinkedIn and Twitter outreach. These are critical steps, but to differentiate yourself from the white sales noise, you need to go further. One way is to comment on the prospect’s content on his or her social channels. Doing so helps to build trust, and shows you’re paying attention to the prospect, and his or her thought leadership content.

Don’t just stop there, however. Continue to nurture the relationship through activity on all social media channels. Facebook, because is sometimes opens the door to the prospect’s personal life, which can help you get to know the prospect better, and to be more strategic.

Then and Now
Sales today is and isn’t how it was during Willie Loman’s and Arthur Miller’s time. Modern technologies now drive the process, but at the end of the day, there has to be an element of trust that’s built through relationships. Social media can help you build this trust—and unlock the Willie Loman in you.