We’ve collected hundreds of thousands of Twitter IDs at HRmarketer software since we started analyzing social conversations (through conference hashtags) for the nearly 1,000 HR and related events we track.

Clearly, conference attendees are finding Twitter to be an incredibly valuable communication platform. Not only does it provide real-time updates on sessions, vendors, social events, etc., but it also adds life to an event and opens the conversation up to a larger audience.

It’s also clear that marketers are finding value from conference hashtags. Many are participating in the conversations and sharing their content. Plus, HRmarketer customers are using our hashtag analysis available in our Conference Engagement module to improve their social marketing, identify new conferences to participate in, grow their social networks and to generate highly targeted lists for Twitter advertising campaigns.

However, one group for the most part isn’t recognizing the value: event organizers. Most are underutilizing the power of their Twitter hashtag, and some don’t even have one! It’s surprising —Twitter is an exceptionally valuable tool for events, particularly if a hashtag is used intelligently. Marketing and brand awareness for the event increases, organizers better communicate with event participants and the conference conversation extends well beyond the one to three days of the live event.

Some events are doing Twitter right. Take LRP’s HR Technology® Conference. The event hashtag (#HRTechConf) stays consistent year to year so nobody has to figure out what it is, is easy to find on the conference website and its use is encouraged. Plus, LRP monitors the hashtag conversation and keeps the conversation going throughout the year. Take a look below at the list of HR and related conferences, including HR Technology®, that use Twitter really effectively — take notice of how many unique people use their hashtags during the event. Impressive. And of tremendous valuable for the events.

But the above conferences are the exception rather than the rule. We’ve noticed most event producers are making mistakes that are reducing the Twitter conversation, and, as a result, the visibility of and buzz around their events – and causing frustration for participants. Some events don’t have any Twitter conversation at all taking place. Here are some of the responses we get when we ask conference organizers what their event’s hashtag is.

What a waste. For the conferences and their attendees. So, what should conferences do to get the most value from Twitter hashtags? Glad you asked. Here are four hashtag best practices:

1. Create and Own Your Hashtag

Many conference organizers create a hashtag that would be effective, only to hurt themselves by not promoting it on materials related to their events. They’ve set up a virtual conference room, but not informed anyone they can use it. To avoid this, place your official hashtag on all of your conference website pages and your event promotions (fliers, registration materials, email footers, show signage, speaker slides, etc.). Encourage use before, during and after the event. 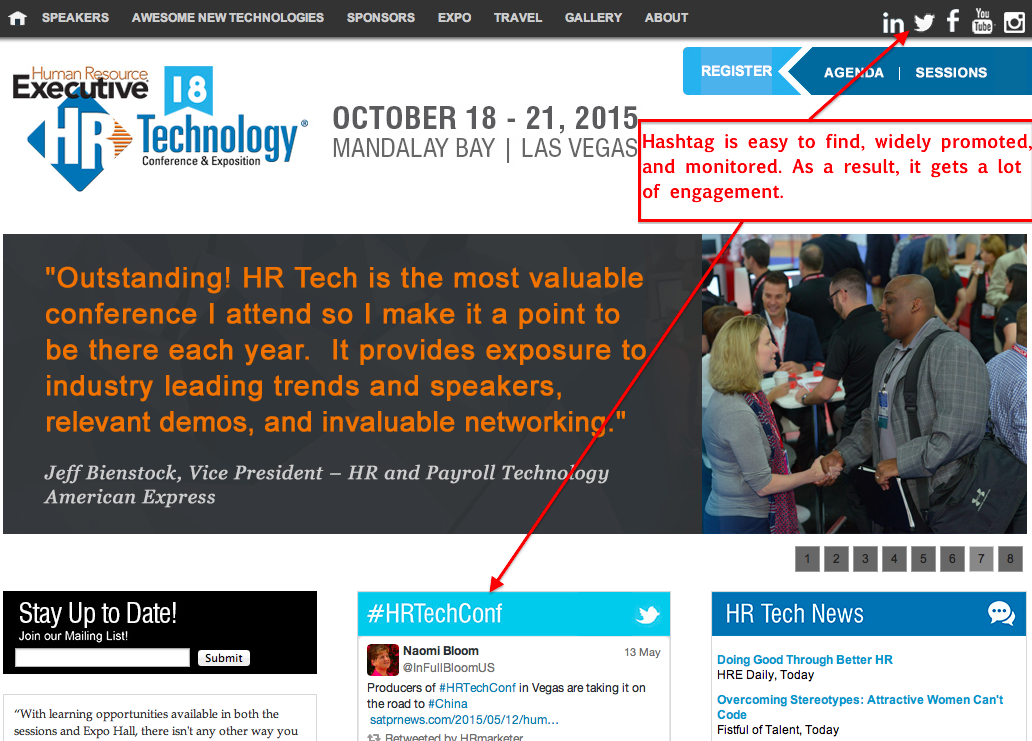 3. Once You Pick a Hashtag, Keep Using It

We’ve seen plenty of conference hashtags with only two or three tweets. If you do not join the Twitter conversation related to your own official hashtag, what is the point of creating a hashtag? A neglected hashtag is a sad and lonely thing. Support and nurture your hashtags! Every tweet is another branding opportunity. And every tweet is an advertisement for your event. Aside from the benefits listed above, consider using your hashtag throughout the year and leading up to the event to do the following:

Another common mistake conference producers make is not participating in the Twitter conversation related to their official hashtags. This can result in Twitter silence, or just isolated chatter, which makes it look like people aren’t engaged with their events. There is nothing worse than someone asking a question about your conference (using the event’s hashtag) and having it go unanswered. A conversation needs a moderator or a leader. Be engaged.

In conclusion, remember what we said above: Twitter is an exceptionally valuable tool for events, particularly if a hashtag is used intelligently. Intelligent use of hashtags means strategic use of hashtags; as with any critical marketing asset, you need to research, audition, test, and refine en route to “publishing,” and you need to support, track, analyze and report once “live.” A well-chosen, well-supported hashtag can add almost immeasurable value to your events. Except the value is measurable. Which is part of why strategic hashtagging is so valuable.

Conference organizers, presenters and attendees, request a demo to learn more about how HRmarketer can help you maximize your Event ROI!