#SHRMTalent: Planes, Trains, Ice Creepers and a GMC Yukon. A recap via @Social_Rhonda 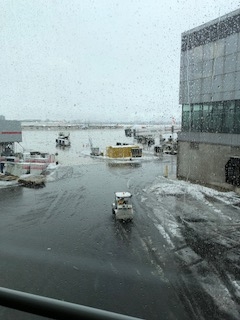 I’ve never had so much difficulty getting to an HR conference. Fortunately SHRM Talent was worth the trouble.

The problem was getting out of Toronto—I was stuck in yet another wicked Northeast ice storm. I had planned ahead for my trip, ordering a 4×4 GMC Yukon limo to get me through the ice and snow to the airport. But even getting out of my house was a struggle, as I delicately walked out to my ride with ice creepers on my feet. Then, my flight was delayed not just once or twice, but three times.

But, after a little uncertainty whether I’d make it to Las Vegas, I finally arrived to glorious warmth and sunshine. Quite a change! Speaking of change, what’s interesting about SHRM Talent is how it’s evolved. Once considered a talent management show, now it’s an everything-and-anything-about-talent event—which was clear by the variety of exhibitors last week. Along with the numerous talent acquisition companies, there were many exhibitors with technologies for addressing a variety of HR functions and challenges.

After being stuck in the wind and snow, the wide aisles and ease of movement about the venue at Caesar’s Palace were invigorating. The booths were smartly laid out, so that they were easily accessible to the 1,400 attendees, plus SHRM laid out food stations around the floor to ensure traffic to all corners of the exhibit hall. I spoke with many exhibitors, and not one complained of poor traffic. One exhibitor told me that their experience at SHRM Talent was so positive that they had decided to exhibit at the SHRM national conference (June 17-20 in Chicago) as a result.

This was the biggest SHRM Talent event ever. If organizers continue to be so conscientious to attendees’ and exhibitors’ experiences on the exhibit floor, the event will only continue to grow. I know I’ll be back. I just hope I’ll have an easier time making it to the conference next year!

I’ll leave you a video collage I made using the photos I took from the show floor (and a few other photos I loved). Enjoy!

Posted in Conferences and Expos, Uncategorized