I’m not an HR professional, I’m a business owner. But I’ve worked with HR solution providers for 20-plus years on the marketing side, so I’ve attended the SHRM Annual Conference many times. And from my viewpoint, SHRM17 was perhaps my favorite yet, for a variety of reasons. Here are some things I loved about this year’s event in New Orleans.

1. The number of and diversity of attendees. SHRM17 attracted more than 15,400 people (second most in history) from all over the world. No other U.S. HR event attracts as many international attendees. The popularity of the event was evident even on my Southwest flight from San Diego to New Orleans; so many of us were going to SHRM that the pilot took the time to say, “Enjoy the conference,” on the loudspeaker when the plane landed. 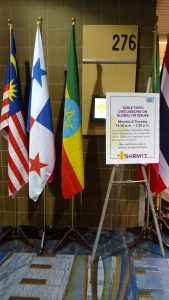 SHRM17 attracted more than 15,400 people from all over the world

2. Registration. Registering so many attendees isn’t easy, so having registration at the airport was a great idea. It’s not new (SHRM does this every year), but still very cool. Better yet, live entertainment. I got off the plane and felt like I had entered SHRM. Nice.

3. Speakers. Too many to mention. Whatever your HR interest there was a track/session/workshop for you. Too bad they are not all recorded because it is impossible to absorb everything you want to hear.

4. The disbursement of food and beverages. When snacks or meals were served on the exhibit floor, you did not have to go far to find them. Yes, they were box meals, but there were choices and plenty of supply. The only negative was the limited seating.

5. Exhibitors. The good news is that I had the pleasure of having in-depth discussions with more than 50 exhibitors. The bad news: there were more than 600. So in three days I was able to visit fewer than 10% of the solution providers. That means the average HR attendee probably saw fewer than 1%. It’s too bad because I was impressed with how diverse, creative and downright cool some of the vendors’ products are. Do you remember the predictions of consolidation? So, so wrong based on what I saw and heard on the exhibit floor. Most HR professionals I spoke with buy best in class, so long as the products can talk to one another, and aren’t interested in single source relationships. That’s good news for small players, but unfortunately it takes marketing $$$$$ for those smaller vendors to get noticed. 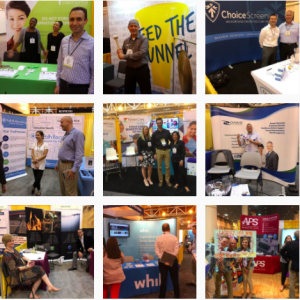 6. Numerous doors. Don’t laugh. At shows a fraction of SHRM’s size, it’s a cattle call trying to enter and exit. At SHRM7, exits and entrances were spread out, allowing you to go in and out without delay.

7. SHRM volunteers. All 700-plus of them!! So helpful and everywhere. If you had a question, chances are a volunteer was within eyesight.

8. Overflow rooms. Many keynotes and general sessions were quite popular, causing the rooms to fill up. Not to worry, outside sessions there were lots of big-screen TVs (with great audio) and chairs so that everybody could watch and listen.

9. Bloggers room/lounge. SHRM invited some of the top thought leaders in the HR space to cover the show. I’m no thought leader but I did have the privilege of having access to the bloggers room and I was impressed. What a wonderful group of people, including the SHRM staff. SO friendly and accommodating. Oh, and the food was great. Thank you, SHRM. 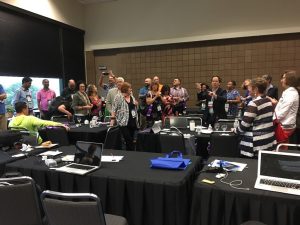 10. Harry Connick, Jr. Ok, I didn’t attend the concert (I headed out early to California to avoid Tropical Storm Cindy) but my colleague “@Social_Rhonda” stuck around (nothing intimidates a Canadian) to inform me that yes, the saint marched in while the storm was blowing in and he was outstanding. 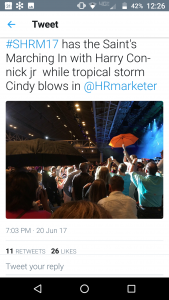 11. How hard good HR is. This is more of an observation. As I noted earlier, I’m not a certified HR professional, and while I have the opportunity to speak with hundreds of HR professionals, I do not pretend to know what it is like to be in the HR trenches day to day. But being at SHRM this week and listening to HR professionals speak only enhanced my appreciation and respect for the profession. Its challenges and opportunities make a big difference in businesses’ performance and people’s lives.

12: Twitter activity:  I think the stats speak for themselves.

It was a lot of fun – and interesting – following the Twitter conversation. Twitter has become an important communication (and BI) tool for people attending HR events and those not attending but interested in the conversation. SHRM did a fantastic job at encouraging the use of the #SHRM17 hashtag.  Here is a list of the people that were mentioned the most with #SHRM17 on Twitter:

Here is the #SHRM17  hashtag report (via HRmarketer).

13. Other. New Orleans, oysters, hurricanes (the beverage), comedians and other entertainers, Bourbon Street, jazz, history—there were so many fun distractions. At the same time, serious knowledge was shared about compliance, risk management, productivity and profitability. But the theme I walked away with was that HR has been and still is about PEOPLE. Sure, you can demand the best from people, hold them to high standards, and expect them to be accountable and engaged, but you must also foster a work environment that encourages such behaviors. A work environment that is kind, fair and appreciative of those individuals who sacrifice so much to keep your doors open.